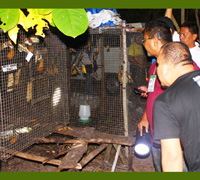 The Department of Environment and Natural Resources (DENR) has scored another legal victory over illegal wildlife traders after a Davao court convicted two individuals who were caught in a raid that turned up over P50-million worth of wildlife species in Mati City last April.

DENR Secretary Roy A. Cimatu hailed the conviction as “yet another corroboration of the agency’s unyielding mission of protecting the country from illegal wildlife trade.”

“It is our mandate to give justice to the voiceless wildlife species that are incessantly being used for personal gains,” Cimatu stressed.

Toledo and Lumakore were meted a jail term of up to four years and a fine of Php30,000 each.

Court records showed that both accused pleaded guilty to the crime upon re-arraignment from the previous plea of not guilty.

The case stemmed from a raid conducted by the Philippine Operations Group of Ivory and Illegal Wildlife Trade or Task Force POGI—a composite team of wildlife enforcers from various agencies including the Biodiversity Management Bureau (BMB), the National Bureau of Investigation (NBI), and the Philippine National Police—in a warehouse in Barangay Dahican.

The raid yielded a total of 450 species of bird, mammals and reptiles, including the endangered Black Palm Cockatoos and Echidna.

The confiscated exotic animals were reportedly in the area for safekeeping in a week before they are transported to and sold in different areas in the country. The task force arrested Toledo and Lumakore, who served as caretakers of the wild animals.

Earlier this year, the DENR also won a lawsuit against a wildlife trader who was caught selling a live green iguana, which is considered an endangered species, in July 2018.

The Quezon City Metropolitan Trial Court Branch 36 convicted Harriet Shelley Velarde for violating RA 9147 and sentenced her to suffer the penalty of imprisonment of one year and one day to two years, and to pay a fine of P200,000. ### 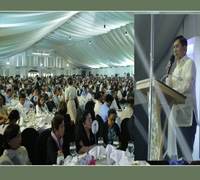 Environment Secretary Roy A. Cimatu has called on the nation’s local executives to show “decisive environmental leadership” and sustain the gains fueled by President Rodrigo Roa Duterte’s strong political will and commitment to address the most pressing environmental problems in the country.

Cimatu met with 74 governors and 1,538 city and municipal mayors at the “The Assembly of Governors and Mayors” held in Manila on July 23. In that same event, the President gave the top leaders of local government units (LGUs) his marching order to intensify the war against illegal drug, corruption, extremism and communist insurgency.

The environment chief reminded the governors and mayors to show political will and take the initiative, and not to wait for the national government to intervene.

He explained that the President’s decision to close and rehabilitate Boracay Island for six months last year was “a general warning” to local executives who sacrifice sustainable development as a result of their failure to enforce environmental laws.

The island’s closure led to the filing of charges against local officials for gross neglect of duty, he pointed out.

“This message was duly noted by local governments in Coron and El Nido in Palawan, Panglao Island in Bohol, and Puerto Galera in Orioental Mindoro, among others,” the environment chief noted.

“You have control over business permits and land use and development,” Cimatu said, as he warned of adverse environmental impacts if such control is not properly exercised.

“LGUs have the autonomy, as well as the duty, to improve environmental conditions in their areas,” Cimatu stressed.

He reminded them of their mandate “to create conditions that can determine whether or not the pursuit of local development can or cannot be environmentally sustainable.”

Cimatu, however, assured the governors and mayors of support from the Department of Environment and Natural Resources (DENR) to capacitate their competence in addressing and implementing priority environmental concerns and projects within their respective jurisdictions.

“The DENR can and will provide technical support on a broad range of concerns from geohazard mapping to reforestation, to the management of solid waste and air and water pollution,” Cimatu said, noting that the local governments of Coron and El Nido in Palawan, Panglao Island in Bohol, and Puerto Galera in Oriental Mindoro have acknowledged this support.

He prodded them not to balk from enforcing environmental laws, and that he is mobilizing the entire DENR workforce from the central, regional, provincial and community levels to assist them “as long as they do their part.”

At the same time, Cimatu urged LGUs to help address the country’s vulnerability to climate change hazards through a convergence approach that highlights the key role of local authorities in the transition to more sustainable ways of environmental governance.

Climate change hazards include sea-level rise, drought and other climate change-induced disasters like landslides and flooding.

“Together, let us continue to transform national policies and programs into local actions with quantifiable gains,” Cimatu said. ###

Cimatu: El Nido won’t be shut down as rehab, ‘no swimming’ policy continue 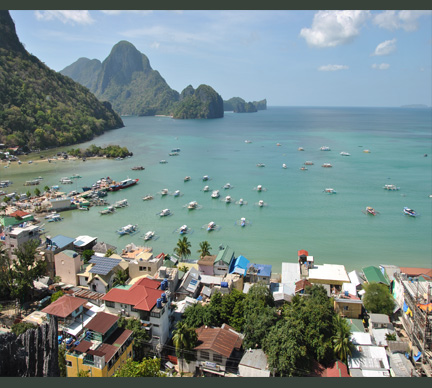 Environment Secretary Roy A. Cimatu has announced that the rehabilitation of the world-famous El Nido beach in Palawan will continue, but it would remain open to tourists.

Cimatu, however, said that the “no swimming” policy would remain in effect in certain areas within Bacuit Bay and Corong-Corong due to high coliform levels.

Citing a recommendation by the regional office of the Department of Environment and Natural Resources (DENR) in MIMAROPA, Cimatu said these areas are not safe for swimming for having high fecal coliform counts reaching nearly 16 million most probable number per 100 milliliters (mpn/100ml).

“We waited for this so that we can make a decision. The decision is that we will continue the rehabilitation,” Cimatu announced during a press conference after emerging from a meeting with Tourism Secretary Bernadette Romulo-Puyat and Interior and Local Government Secretary Eduardo Año in Camp Aguinaldo last Thursday, August 1.

The DENR chief added: “We will not close El Nido, and we will continue the ‘no swimming’ in [three outfalls] in Bacuit Bay and one in Corong-Corong.”

He identified the three outfalls in Bacuit Bay as El Nido Estero, Cabugao and Masagana.

Aside from the degradation of water quality that was caused by lack of sewerage systems of household and commercial establishments, Cimatu said the encroachment in easement zone and timberland, solid waste management and violation of environmental laws were also found to have contributed to the dreadful conditions in El Nido.

Cimatu has directed the regional executive director of DENR MIMAROPA to form an inter-agency task force composed of regional offices of the Department of Tourism (DOT) and the Department of the Interior and Local Government and representatives from the local government unit (LGU) to “undertake investigation and inspection of establishments, including households” within El Nido’s tourism area.

The task force will have 20 days starting August 5 to conduct their operations and is expected to submit the results on August 25.

Cimatu ordered the task force to identify non-compliant commercial establishments or those that violate environmental laws, no business permits and without DOT accreditation.

The former military chief emphasized that if there will be recommendations from the task force to shut down establishments, it will only be “individual” businesses and not the entire ecotourism area.

Asked about the cause of the current state of El Nido, Cimatu cited the lack of regulatory measures from the LGU, especially the mayor, despite the Local Government Code designating LGUs as in-charge of their respective tourism sites.

“Ganito po ang nangyari sa Boracay noon, walang nagko-control, but this time we are able to stop all this. And we will continue to stop this because we cannot allow na mag-deteriorate itong El Nido into another Boracay,” said Cimatu.

“That is the reason why we cautioned the mayor, because the mayor, technically, is in-charge of this, it is not our task force. However, we are providing technical assistance and all other assistance that the government can do in order to save El Nido.”

Environment Secretary Roy A. Cimatu has commended the regional office of the Department of Environment and Natural Resources (DENR) in Central Luzon after its radio program won the “Best Public Affairs Program” during the recently concluded 27th Golden Dove Awards of the Kapisanan ng mga Brodkaster ng Pilipinas (KBP).

Hosted by the DENR-Central Luzon’s Public Affairs Office, “Earth Hour Central Luzon” is a one-hour program aired at 9 am of every second and fourth Tuesday of the month over DWRW 95.1 FM, a local radio station based in San Fernando, Pampanga.

Cimatu said the award received by the Central Luzon office from the prestigious annual television and radio competition brought honor to the DENR.

He said the success of the radio program was “attributed to the DENR’s continuing mission to educate the public about the environment, so they may conserve and protect it.”

“We are thankful to KBP for recognizing our efforts to educate the public at large about the pressing environmental issues of the contemporary time. We are assuring everyone that we will continue this noble pursuit,” he added.

For his part, DENR Central Luzon Regional Executive Director Paquito Moreno thanked the KBP for the award and the public for supporting the program.

Moreno also expressed his gratitude to Secretary Cimatu for “his guidance and directives that encourage the region to do its best.”

“This award will further boost our public affairs program to sustain our efforts in bringing DENR programs closer to the people,” he said.

He also promised that the DENR Central Luzon will continue to provide the public with timely, relevant and accurate information on developments in the environment and natural resources sectors in the region.

The Golden Dove Awards is considered the most prestigious and most credible award-giving body in the country that recognizes television and radio stations, programs, personalities, public service announcements, and promotional materials from broadcasting companies who are members of the KBP.

KBP is a non-government, non-profit organization of the broadcast media in the Philippines with more than 120 members from various radio and television companies nationwide. ###

“We are thankful to KBP for recognizing our efforts to educate the public at large about the pressing environmental issues of the contemporary time. We are assuring everyone that we will continue this noble pursuit,” dagdag pa nito.

“This award will further boost our public affairs program to sustain our efforts in bringing DENR programs closer to the people,” ani Moreno.