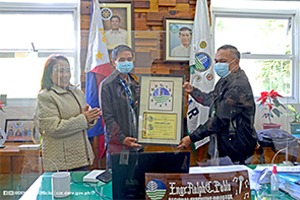 In a virtual retirement ceremony marking the 41 years and 6 months of its Assistant Regional Executive Director for Technical Services’ (ARED-TS) tenure in government service, DENR-CAR sent off For. Augusto Dapig Lagon, CESO IV.
The soft-spoken Forester from Tabuk City, Kalinga was born on August 28, 1956, hence, meriting the name ‘Augusto,’ meaning majestic and venerable. He is married to Glea T. Lagon, also a DENR employee in CENRO Baguio. They are gifted with 4 children.
ARED for Management Services (ARED-MS) Atty. Cleo D. Sabado-Andrada paid homage to her retiring counterpart in the DENR-CAR Regional Office by recognizing his exemplary service and well-thought out ideas that contributed to the excellent performance of the DENR-CAR in the recent years.
“Sir, I'd like you to know that I have so much respect for you and what you do; your wisdom when you speak; and your well-thought out ideas which are very substantial and helpful in attaining our goals, in addressing our issues, or simply in making our work easier,” she confided.
Lagon started his government service in 1979 as an Assistant Instructor at the Don Mariano Marcos Memorial State University (DMMMSU) in La Union. Being a true-blue forester, he moved to the Forest Development Bureau as a Forester and rose from the ranks, occupying various key positions first as a Division Chief in 1989, then as a CENR Officer of the then CENRO Wangal, La Trinidad in 1995 and playing a key role as a PENR Officer of PENRO Apayao in the DENR’s transition during the separation of the provinces of Kalinga and Apayao from 1997 until the closing of the 20th Century.
His short stay in Region 8 as an ARED for Operations from August 1- October 10, 2000 marked the halfway mark of his government service and his only stint outside his beloved Cordillera Administrative Region. Carrying his position, he returned to CAR and on March30, 2004, he was promoted to Director III and served as DENR-CAR’s Regional Technical Director for Forest Management Services. He was conferred the Career Executive Service Officer IV rank in 2010 and on January 18, 2015, he held the position of Assistant Regional Director for Technical Services, a position he held on until his retirement.
ARED Lagon received prestigious citations as a DENR Official like the coveted EAGLE award as a CENR Officer in 1995. For 2 consecutive years, he was again a recipient of the Outstanding Performance Award as a CENRO of the DENR in 1996 and 1997. He also received a Certificate of Recognition for his achievements in the DENR consistent to President Gloria Macapagal Arroyo’s State of the Nation Address in 2002. In the following year, he also received a Certificate of Achievement in the implementation of the Forestry Sector Project (FSP) of the DENR. In addition, in 2006, he received the KALSA Award for Public Service from the Benguet State University.
The outgoing DENR-CAR ARED-TS is a product of the Benguet State University’s long list of foresters. He pursued his graduate studies in the University of the Philippines, Los Banos (UPLB) earning him a Master’s Degree in Forestry.
15 other retiring DENR-CAR personnel joined ARED Lagon in the send-off ceremonies. They are: Sylvia M. Kitayan, Elias S. Botangen and Ernesto A. Aguyos of PENRO Benguet; Delfin B. Felipe of PENRO Kalinga; Aurelio O. Moog, Juan Manahan B. Wegiyon and Florencio B. Banggolay of CENRO Paracelis; Magdalena A. Buyogan and Rosita K. Sallidao of PENRO Kalinga; Nena M. Sangdaan, Janet L. Olat, Edgar S. Sallidao, Lolita C. Baggay and Francisco B. Nagoy of CENRO Tabuk and Alberto G. Balnao of CENRO Pinukpuk.
Taking turns in thanking all their comrades for the years of serving the DENR-CAR, the honorees attributed their long tenure in the service in enjoying their work and finding satisfaction in contributing to the improvement of the environment for future generations.
Meanwhile, true to his unassuming character, ARED Lagon thanked his comrades and credited everything to the fulfillment of the will of his Creator.
“It is not about me, it was Divine Guidance that led me to achieve everything. I am nothing,” he noted.
He also thanked all his mentors and expressed his optimism on the younger breed of servants in the DENR. He urged his fellow workers to “look beyond themselves” and to enjoy serving because being in the service is a constant process of learning and adapting.
Regional Executive Director Ralph C. Pablo expressed his admiration to all the retiring personnel and thanked them for their contributions to the department and their dedicated and humble service to the people.
Addressing the outgoing ARED for TS, Pablo credited him for being the “moral barometer” of the DENR-CAR in all its accomplishments.
“You are a constant reminder to all of us, especially to your younger colleagues, of making an impact to the communities through our service. Your devotion to God has always been manifested in the sincerity of your service to the people,” he spoke of Lagon.

The people behind a COVID-safe DENR-CAR 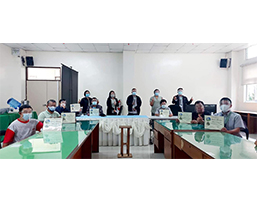 In recognition of their selfless hardwork in the regular conduct of disinfection, the Department of Environment and Natural Resources-CAR, awarded Certificates of Recognition to the members of the Anti-COVID-19 Task Force led by Mr. Ronaldo Barongan.
The activity was initiated by the Program on Awards and Incentives for Service Excellence Committee headed by Assistant Regional Executive Director, Atty. Cleo Sabado-Andrada.
Several PPEs were also provided to them by the DENR-CAR Employees Association through its President Elizabeth Antolin, to protect them during the conduct of disinfection.
"This is an additional task to you yet you continue to render service overtime even on holidays. The safety of our employees and of our workplace in general is something we owe to you. Without you, we wouldn't have maintained a COVID-free workplace for the previous months," Regional Executive Director Engr. Ralph Pablo closed.
Juancho Manuel, one of the members, was also recognized and awarded a Certificate of Recognition for his honesty, returning a lost smartphone within the office. Four (4) government vehicles were consecrated and turned over today, October 5, 2020, by the DENR-CAR Regional Office to its field offices as part of the continuing operationalization of the Integrated Natural Resources and Environmental Management Project (INREMP) in the region for the sustainable watershed management of the Chico Upper River Basin.

PENRO Kalinga received two (2) brand new units of Nissan Urvan NV350 while PENROs Apayao and Mountain Province received a unit each of the said vehicles which are expected to bring relief to the mobilization efforts of the DENR-CAR in the maintenance and monitoring of its area which covers 4,545.52 square kilometers.
The funding of these vehicles is derived from the loan obtained by the Philippine Government from the Asian Development Bank (ADB).
Regional Executive Director Ralph C. Pablo considered these automobiles as “blessings” and urged its designated drivers to maintain the good condition of the said vehicles.
Meanwhile, the officers of the DENR- CAR Employees’ Association (DENR-CAREA) also led the inaugural of the DENR-CAR Regional Office Infirmary.
The facility, granted to the Association by the DENR-CAR Administration, will serve as the office’s clinic that will accommodate personnel as well as customers who shall need first aid and other emergency treatment.
It shall be manned on an alternate basis by personnel who have undergone professional medical training. 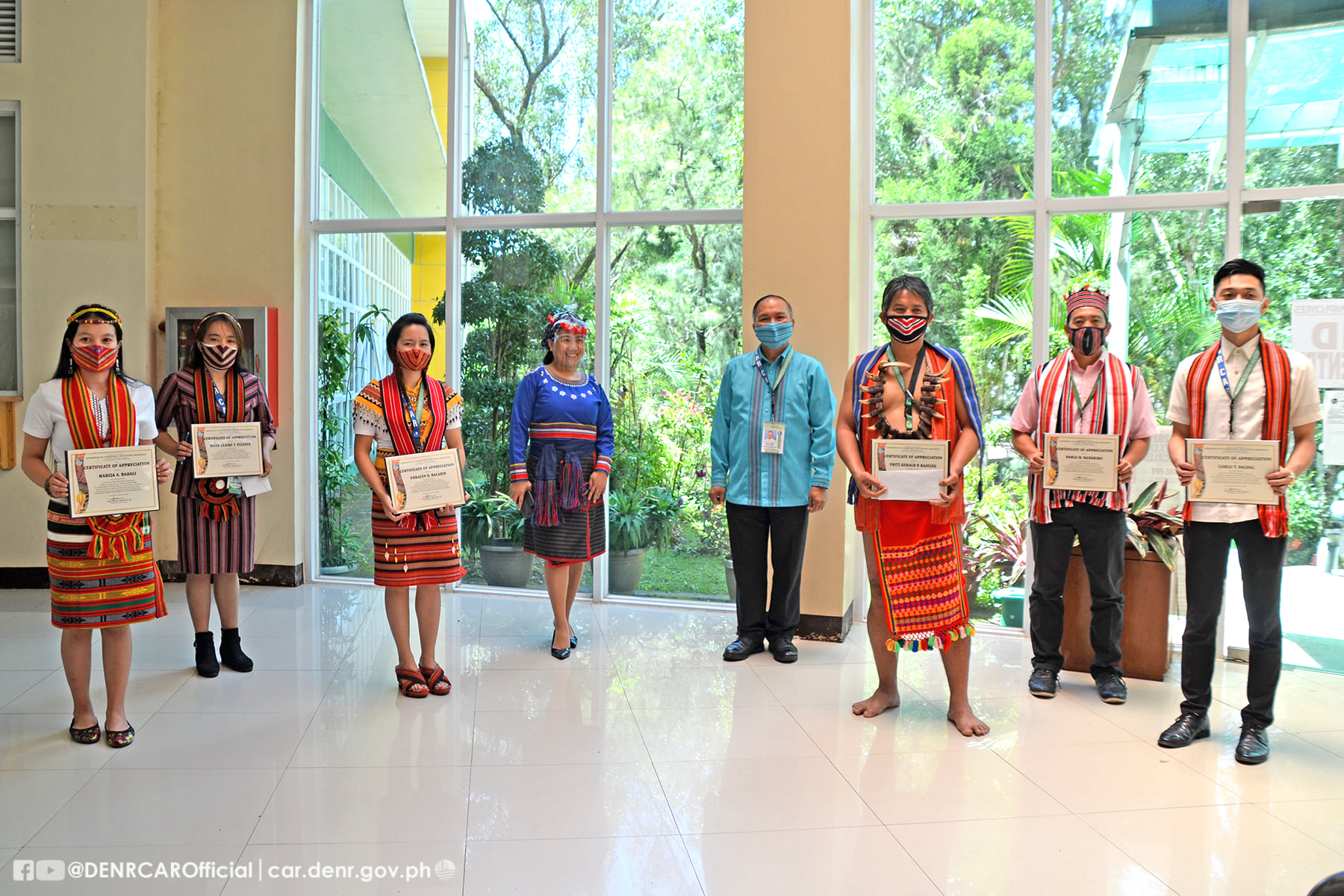 Saving the best for last, DENR-CAR employees don their ethnic Cordilleran attires on the last Monday of the month-long celebration of the Cordillera Month.

In a simple ceremony, adjudged Best-Dressed male and female employees in the previous Mondays of the month received certificates of appreciation and cash gifts for showcasing their Cordilleran heritage through their garbs.

DENR-CAR Regional Executive Director Engr. Ralph Pablo expressed optimism that the heartfelt compliance to simple directives, demonstrated by the faithful and cordial wearing of these attires by DENR-CAR employees, will go a long way in embracing Cordilleran identity.

MANI-LOVE BAY: From Splendid to squalor and the DENR's efforts to bring back the splendor

In the heydays of the yesteryears, every Filipino adored the beauty of this body of water. With its crystalline surface, tranquil environment and captivating scenery— that’s the Manila Bay our old foks had cherised for a long time.