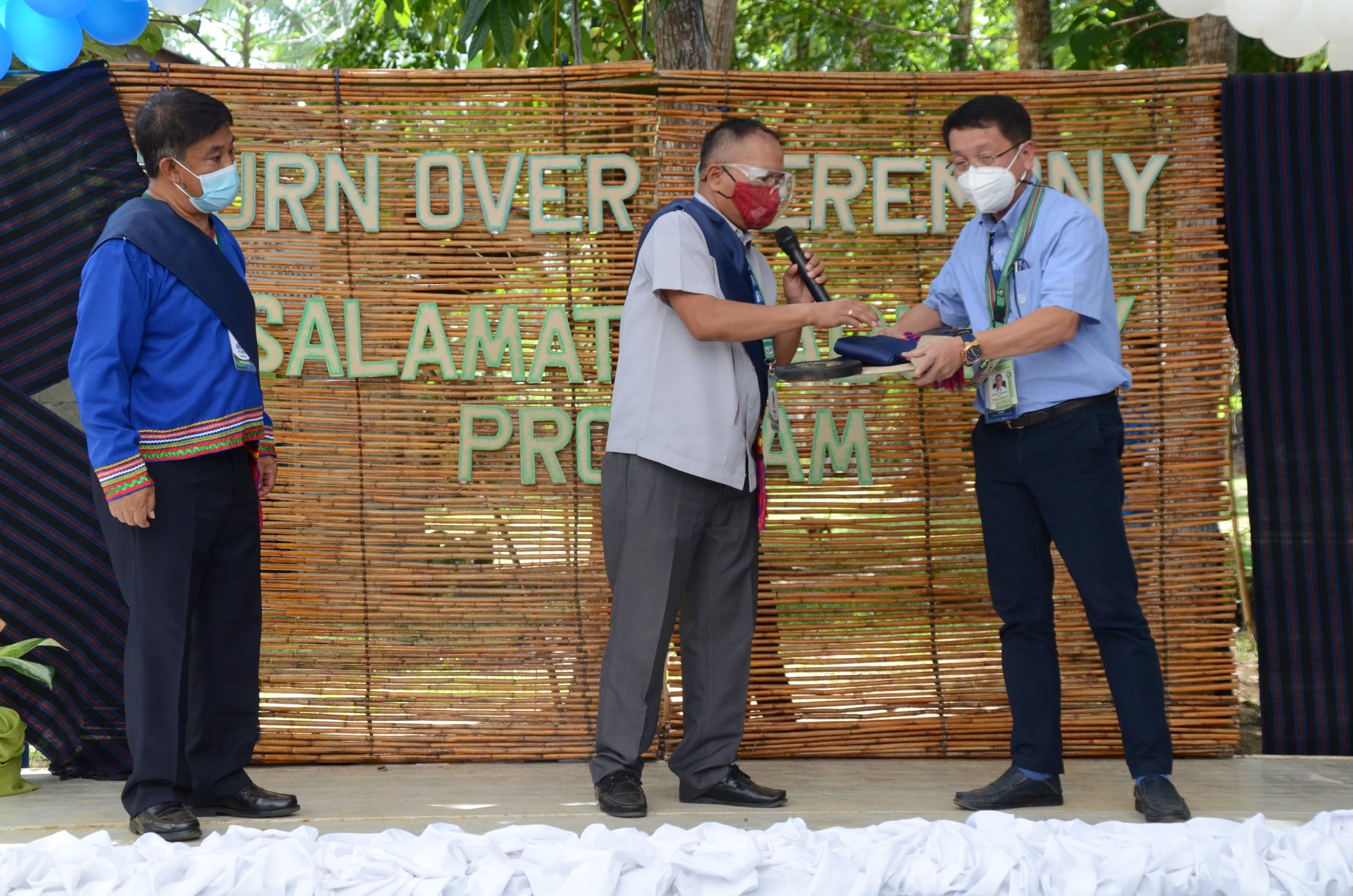 Pursuant to Special Order No. 2021-455, Rainier Balbuena has been designated as the Officer-in-Charge, PENR Officer Apayao. His post as the Technical Services Division Chief of PENRO Benguet was taken over by For. Teber Dionisio.
Community Environment and Natural Resources Office Conner, formerly led by For. Dionisio is once again led by For. Rodel Cacpal who had a stint in PENRO Apayao. The vacated post by Cacpal was filled in by For. Noralyn Piano who now serves as the Technical Services Division Chief of PENRO Apayao. The Management Services Division, on the other hand, is now led by Crizzane Joy Yturzaeta. In addition, the Office is designated with a new accountant, Christma dela Peña.
Assistant Regional Executive Director for Management Services Atty. Cleo Sabado-Andrada guaranteed the set of leaders newly installed in Apayao underwent meticulous selection, taking into consideration the needs of the Apayaos in terms of environment and natural resources management.
“We wanted to let you know that we did not randomly pick people to take over (these positions) only for the sake of having someone to call PENR Officer and key officials. We picked someone whom we know can lead, and lead as good, or ideally, better than the former PENR Officer did,” she said.
Regional Executive Director Ralph Pablo also assured the people of Apayao that the province’s environment is in good hands under the leadership of Balbuena. He humbly highlighted that the new PENR Officer’s credentials, work experience and values make him fit as a leader who can “empower people, lead change, and inspire people”.
Governor Eleonor Bulut-Begtang, who graced the Turnover Ceremony cum Salamat-Mabuhay Program on June 21, welcomed the change of leadership in Apayao saying the identity of officials is the least of her concerns so long as they can lead PENRO Apayao effectively.
“We need sincere leaders who will lead. Someone with the political will to address the environmental concerns in the province,” Bulut-Begtang started.
She continued emphasizing the need for the newly installed officials to have a strong tie with the local government unit. While she acknowledged that government agencies have different mandates, she underscored her responsibility and authority as the provincial governor to supervise provincial government officers and to make sure their mandates and institutional objectives are aligned with that of the local government unit of Apayao.
In his response, Balbuena committed to the continued partnership between PENRO Apayao and the PLGU of Apayao. He vowed to look into and address concerns in different sectors of the environment, particularly, illegal logging, kaingin, and ecosystems management.
Former PENR Officer Bravo told Balbuena that while it may be challenging to lead PENRO Apayao especially so that the LGU’s eye is on the office, he assured that the local government officials’ support and involvement is the best consolation. Representatives from the Department of Environment and Natural Resources led by DENR Special Concerns Undersecretary Edilberto Leonardo visited Mt. Pulag National Park (MPNP) to inspect and monitor the status of the park’s ecosystem.
The DENR Team were joined by representatives from Department of Interior and Local Government, Armed Forces of the Philippines, Philippine National Police, Department of National Defense and the Local Government Unit of Kabayan.
The visit was accompanied by the identification of guard mounting and the participants of the ocular inspection shared the responsibility of planting trees to protect the MPNP. Twenty seedlings of Benguet Pine were planted along Babadak lakeside.
During the monitoring, Usec Leonardo noticed that though agricultural areas are visible at the foot of the park, wildlife still thrived and flourished in the park. It was noted that the once scorched dwarf bamboo has already grown and has spread throughout the park. Different kinds of flora are found to “stand out” in the mossy forest of the park. Some personnel said they spotted a cloud rat in the MPNP.
During his visit, Undersecretary Leonardo also expressed his support in the faster processing of MPNP’s full legislation under the RA 11038, also known as the “Expanded National Integrated Protected Areas System Act of 2018,” declaring Protected Areas and providing for their management – ensuring protection for the park.
DENR Cordillera Regional Executive Director Ralph Pablo acclaimed that the park naturally healed and flourished since it was closed from the public during the COVID-19 outbreak.
The Protected Area and Management Board has still to decide if the park can be opened to the public. To date, the park remains closed. 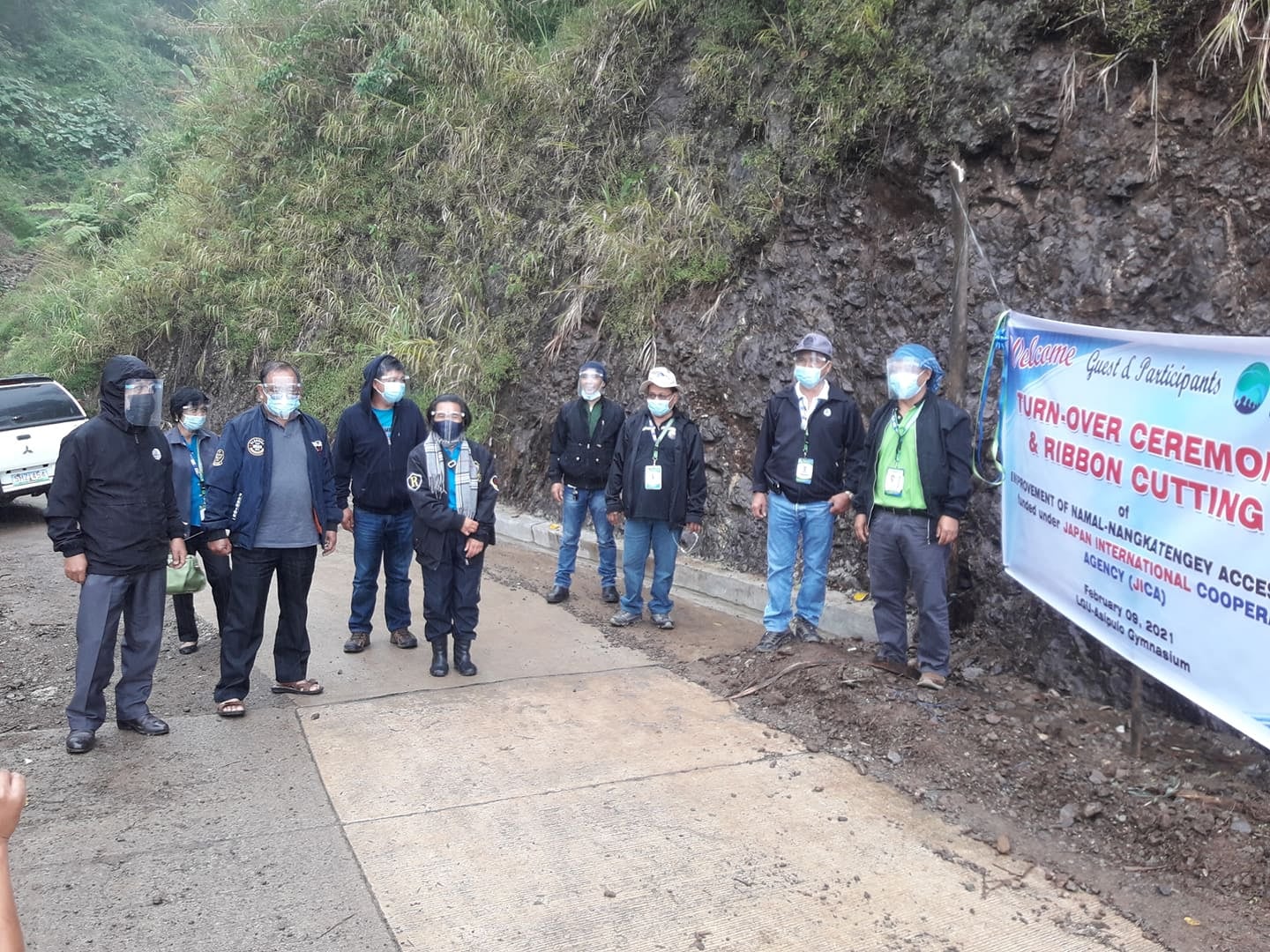 DENR-CAR Regional Executive Director Ralph C. Pablo facilitated the official turn-over of the completed 1.8 kilometers Agro-support Facility (ASF) access road worth Php 24,020,557.85 to the officials of the Local Government Unit (LGU) of Asipulo, Ifugao.
The said completed project funded under the Forest Management Project (FMP) implemented in the province is expected to aid the far-flung barangay of Namang, Asipulo and its communities engaged in agro-forestry activities such as the Namal Nampaling Muyong Owners Association (NAMNAMA) in the easier transport of their produce.
RED Pablo expressed his optimism that the ASF will be vital in creating progress not only in gardening but also in the observance and implementation of sustainable forest management in Ifugao through the “Muyong” System.
Meanwhile, PENR Officer of PENRO Ifugao Ernesto M. Aton rallied the beneficiaries of the project to observe conservation farming in the area through the Sloping Agricultural Land Technology (SALT). In this way, the benefits of the project will be sustained and the facility to be safeguarded, he further noted.
Asipulo Municipal Mayor Armando P. Domilod expressed gratitude to the DENR for the project and conveyed its valuable impact to the environment and to the community considering some issues of insurgencies in the area.
Mayor Domilod recognized that the completion of the ASF in the area will go a long way in the government’s effort under the newly created National Task Force to End Local Communists Armed Conflict (NTF-ELCAC).

With the retirement of employees becoming a routine in the DENR-CAR, the Human Resources Selection and Promotion Board (HRSPB) is doing all efforts to fill up the vacant positions vacated by retiring employees to avoid disruption of work. Assistant Regional Executive Director for Management Services and the Head of the HRMPSB, Atty. Cleo D. Sabado-Andrada said that in the selection process, functional employees with right mindset and disposition and who diligently uphold the DENR Core Values are given due promotions. Further, newly appointed employees are made aware of the duties attached to their job for the efficient attainment of the agency’s targets, through an orientation that would be conducted for the newly appointed employees.
Of the 33 personnel composing the 16th tranche, 23 are promoted and 10 with original appointments. PENRO Ifugao has the most number of appointed and promoted with 9 followed by PENRO Kalinga and PENRO Mt. Province with 6 each, the Regional Office with 5, PENRO Abra with employees 4 and PENRO Benguet with 3.
RED Pablo gave an acronym for the qualities he wants the new appointees to maintain through the acronym VARIANT. According to him, this acronym is a very common word that could be associated or connected with the on-going pandemic thus easy to remember. VARIANT stands for V-aliant A-ction R-ole I-nvolvement A-chivement N-obility T-eam work.
He expects a DENR-CAR employee to be courageous enough to get out of his comfort zone and contribute in the attainment of the Agency’s objectives and goals.
While young employees are joining the ranks, some are also leaving the service having reached the mandatory age or due to personal matter.
“Retirement is the beginning of an open highway, not the end of the road”, Regional Executive Director Ralph C. Pablo stressed this message during the Salamat-Mabuhay Program held recently via virtual ceremony.
Eight DENR – CAR personnel, two of whom reached the mandatory age or retirement, ended their government service after serving the DENR-CAR for 18-41 years of dedicated service. The Chief Administrative Officers and 2 and 1 Forest Rangers, respectively from PENRO Apayao and PENRO Mt. Province decided to retire while the Chief of the Technical Services Division of Kalinga and PENRO Abra’s Supervising Ecosystems Management Specialist also are among the honorees during the Salamat – Mabuhay ceremony. In the Regional Office, the Chief of the Forest Utilization Section of the LPDD also decided to retire.
“As you leave us at the DENR - CAR, we would like to thank you for sticking to the oath you pledged to upon entering the government service which you still do until your last day of reporting in the office. As a retiree, you now have time to serve your family.”, Assistant Regional Director for Technical Services Benjamin A. Ventura said as a rejoinder.

New DENR-CAR Officials sworn in to office in early 2021 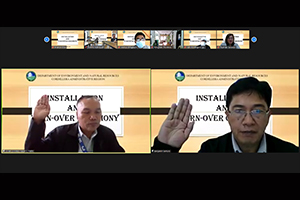 Wanting to start the year with all its right sentinels in place, the DENR-CAR Management installed its key officials to different posts right at the first working day of the Calendar Year 2021.
The vacancy created by the retirement of Assistant Regional Executive Director for Technical Services (ARD-TS) For. Augusto D. Lagon is now covered by the designation of the Chief of the Surveys and Mapping Division (SMD) to the said office. Engr. Benjamin A. Ventura, a Geodetic Engineer, will now hold the post on an interim basis pending the appointment of the rightful holder of the position from the Central Office.
Ventura on the other hand will be substituted to his post by his former deputy, the Chief of the Surveys and Control System Section of the SMD, Engr. Marcos A. Badongen.
Meanwhile, Teber L. Dionisio, previously serving as a Supervising Ecosystems Management Specialist (SEMS) in PENRO Benguet has been elevated to take over the post vacated by the recently retired Chief of the Technical Services Division (TSD) of PENRO Apayao. Dionisio, is now on his second tour of duty to the said office with the renewal of his designation he received in December of 2020.
Assistant Regional Executive Director for Management Services (ARED-MS), Atty. Cleo D. Sabado-Andrada recognized the fittingness of the installation of the new officials with the new year, giving them a “fresh start.”
“They can establish their vision for their respective offices, and put in place their strategies to attain this calendar year's physical and financial targets,” she said, encouraging the officials taking new posts.
After conveying the yearend message of the DENR Secretary to the DENR-CAR officials in the loop, Regional Executive Director Engr. Ralph C. Pablo expressed his optimism with the capabilities of the newly installed officials.
Challenging them to sustain the level of excellence in their service, he underscored the values of maintaining a good character, openness to different insights, being a visionary, exercising initiative and decisiveness as necessary ingredients to become successful leaders.