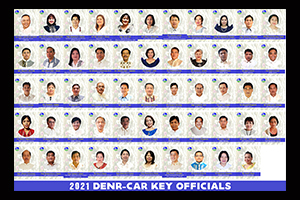 With the retirement of a number of key officials in the Department of Environment and Natural Resources – Cordillera Administrative Region (DENR-CAR), new designations have been made to supply the subsequent vacancies.
Supplying key personnel manning the Regional Office and its field offices was the first order of business during the first working day of 2021 with the installation of the Engr. Benjamin A. Ventura as the OIC, Assistant Regional Executive Regional Director for Technical Services (ARED-TS) after the retirement of For. Augusto D. Lagon.
Meanwhile, Atty. Cleo D. Sabado-Andrada will continue to function as the OIC, ARED for Management Services (ARED-MS). Ventura and Andrada serve as the primary deputies of Regional Executive Director (RED) Engr. Ralph C. Pablo.
In the field offices, For. Marcelo G. Bumidang is approaching his 1st full year of service as the PENR Officer of PENRO Abra. He is assisted by Marites A. Salcedo, Chief of the Management Services Division (MSD) and For. Florencio I. Pacio as the Chief of the Technical Services Division. Completing the list of DENR-CAR officials in Abra are For. Abreolo Joey C. Languisan, OIC, CENR Officer of CENRO Bangued and For. Shirley T. Leaño, the OIC, CENR Officer of CENRO Lagangilang.
In the Province of Apayao, Atty. Romeo G. Bravo continues to serve as the PENR Officer. He is joined by Trinidad K. Daligdig as the MSD and For. Teber L. Dionisio as the OIC-Chief, TSD. For. Raul T. Castro serves as the OIC, CENR Officer of CENRO Calanasan while For. Rodel V. Cacpal was recently elevated to be the OIC, CENR Officer of CENRO Conner.
In Benguet, Edgardo S. Flor heads the PENRO. He is assisted by For. Joseph L. Mauting and Rainier D. Balbuena as the OIC, MSD Chief and TSD Chief, respectively. For. Julio D. Lopez heads CENRO Buguias while Engr. Leandro L. De Jesus functions as the OIC, CENR Officer of CENRO Baguio.
Engr. Ernesto M. Aton stays as the PENR Officer of PENRO Ifugao. He is joined by For. Mary D. Baguilat and Ferdinand A. Santiago as the heads of the PENRO’s MSD and TSD, respectively. Senior Forest Management Specialist (SFMS) For. Manuel P. Magkachi was recently installed OIC, CENR Officer of CENRO Lamut while For. John T. Langbis mans CENRO Alfonso Lista.
PENRO Kalinga is being led by For. Noel M. Barrientos as OIC, PENR Officer. CENR Officer For. Severino L. Dalutag heads CENRO Tabuk while For. Imelda B. Casiwan is designated as the OIC, CENR Officer of CENRO Pinukpuk. Meanwhile, Denne A. Capuyan is recently installed the OIC-Chief of the PENRO’s TSD while For. Veronica R. Banglot is the new OIC-Chief of the MSD.
In Mountain Province, For. Joel T. Behis continues to serve as the OIC, PENR Officer. He is joined by Engr. Gilbert G. Mangliwan and For. Jerry T. Goddi as OIC CENR Officers of CENROs Paracelis and Sabangan, respectively. Meanwhile, For. Anita T. Tangbawan is the OIC, Chief of the PENRO’s TSD. Alice B. Macli-ing continues to be the head of the PENRO’s MSD.
Rounding up the key officials of the DENR-CAR are the division chiefs stationed in the DENR-CAR Regional Office: Perlita T. Nerja (Chief, Strategic Communication and Initiatives Group); Mia Alma M. Batcagan-Tayag (Chief, Administrative Division); Atty. Marcos E. Bias (OIC-Chief, Finance Division); Atty. Renato John C. Bestre (Chief, Legal Division); For. Rosita Y. Apilis (OIC-Chief, Planning and Management Division); For. Julius K. Cawilan (Chief, Conservation and Development Division); Engr. Ma. Rowena M. Caccam (Chief, Licenses, Patents and Deeds Division); Atty. Charinne Hanako M. Abalos (OIC-Chief, Enforcement Division); and Engr. Marcos A. Badongen (OIC-Chief, Surveys & Mapping Division).
Finally, Fay W. Apil continues to be the Regional Director of the Mines and Geosciences Bureau – CAR. Ma. Victoria V. Abrera resumes her tenure as the Regional Director of the Environmental Management Bureau-CAR. Together with the RED and the DENR AREDs, these two officials form part of the Regional Executive Committee by virtue of DENR Administrative Order 2018-18 that provides a unified coordinative mechanism in the agency within the regional level.
Helen A. Maddumba heads the Watershed And Water Resources Research Center (WWRRDEC), the research, development and extension arm of the DENR on water resources and watershed concerns.
Regional Executive Director Ralph C. Pablo, in a virtual conference, urged the different key DENR-CAR officials to remain responsive to the varying needs of their constituents with the same level of excellence amid the challenges posed by the ongoing pandemic.
“The mission remains the same, notwithstanding these unprecedented challenges in the performance of our jobs,” the DENR-CAR chief noted.
“In this trying time in the history of our nation, as public servants, let us exhibit excellence by being proactive in sustaining the gains of our collective efforts in the past years,” he continued.
The DENR-CAR carries on with its commitment to be at the forefront of sustainable development in the region as the agency welcomes the year 2021. 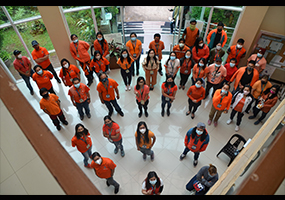 Offices likewise were adorned by orange accents to spark curiosity and raise awareness on the problem of violence and the elimination of all forms of violence against women.
DENR-CAR Regional Executive Director Ralph C. Pablo called for a more vigilant stand for the vulnerable members of society, especially women, during this ongoing pandemic caused by COVID-19.
“With the ongoing uncertainties in our economy, not to mention the health scare we are in and the subsequent restrictions we continue to face in our own communities, let us do our best to provide a safe and healthy environment for all women,” he said.
Taking to heart the campaign’s recurring theme, “VAW-free community starts with Me,” DENR-CAR hopes to gather more public support to promote respect for women in homes, workplaces and in communities. 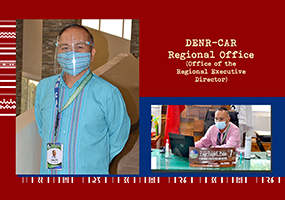 With the theme “Correcting Historical Injustices for Indigenous Peoples’ Rights and Welfare,” employees of DENR-CAR together with EMB-CAR, MGB-CAR and WWRRDEC commemorate the Indigenous People’s (IP) month celebration through the wearing of Cordillera and/or Cordillera-inspired attires.
Cultural attires are used even up to this day to preserve the IPs’ customs and traditions, and to remind them of their cultural identity.
In the Cordilleras, most cultural attires are colored black, red, green, white, blue, and yellow. Some provinces such as Kalinga have representation for such colors: indigo embodies the sky while the prominent red symbolizes the ground. Most provinces have geometrical frills in their weavings that usually symbolizes nature such as mountain, rain, lizard, and even man.
This shows how nature and the environment are deeply embedded in the culture of the Cordillerans.
For more photos, you may check our FB page: https://www.facebook.com/DENRCAROfficial/posts/2458898781078544

DENR-CAR partakes in Season of Creation 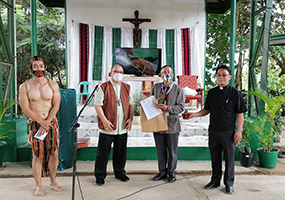 The Department of Environment and Natural Resources – Cordillera Administrative Region (DENR-CAR) joined the Catholic faithful of the Diocese of Baguio in culminating the Season of Creation on October 14, 2020.
This month long celebration that commenced last September 1 calls all Christians to come together to heal man’s relationship with Creation and with his fellowmen.
After a tree planting ceremony in Dalicno, Itogon Benguet, a Eucharistic Celebration ensued presided over by the Most Reverend Victor B. Bendico, D.D., Bishop of the Diocese of Baguio, together with some of the members of the Clergy in the Parish of St. Charles Borromeo.
Bendico called for an “ecological conversion” based on the “splendid communion” that exist in Creation.
Meanwhile, DENR-CAR Regional Executive Director, Ralph C. Pablo reminded the congregation that the destiny of humanity and of Creation is determined by the responsible use of this planet’s resources.
“The imbalance in Creation, generated by human desire for wealth and power, remains the primary threat that destroys Creation and humanity,” he said.
This was seconded by Fay W. Apil, Regional Director of the Mines and Geosciences Bureau - CAR, who called for striking a balance between man’s extraction of the earth’s natural minerals and his responsibility of being a steward of creation. 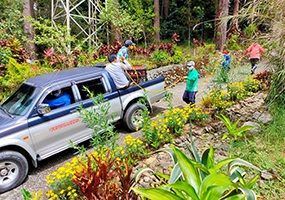 The Department of Environment and Natural Resources-CAR had conducted another disinfection after one of its employees tested positive for the coronavirus diseases (COVID-19). Making sure that its employees and clients, alike, remain free from the virus, the DENR-CAR closed its office and its vicinities on October 12-14 for the conduct of the thorough disinfection. Employees who may have possibly been in contact and exposed to the employee positive of the virus had been ordered to undergo home quarantine for 14 days. The DENR-CAR Regional Office will resume office operations and will be open to the public on October 15. Another batch of employees who were neither in contact nor exposed to the COVID-19 patient shall report thereon to resume public service.